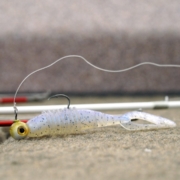 Americana Outdoors is taking a close look at a brand new jighead from Big Bite Baits that’s taking the fishing world by storm, and will surely be a crappie catchin’ magnet! As pro angler Mike McClelland will tell us, “one of the biggest trends over the past four or five years has definitely been the forward facing sonar… and this new Big Bite Pendulate Jighead is gonna be the perfect head anytime you’re wanting to vertical fish.” The Pendulate Jighead is available in four sizes, including an 1/8 oz, 3/16 oz, 1/4 oz, and 3/8 oz. This head is also sold in four different colors, including Bare Shad, Alewife, Shad, and Shore Minnow. Big Bite Baits designed this jig with a swivel molded directly into the head, which effectively eliminates line twist when the jig is falling. With this jig head you’ll have the ability to present the bait better, have less line twists, use a variety of baits to pair with the jig. To learn more about the Pendulate Jighead, visit bigbitebaits.com! 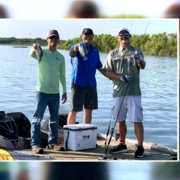 We’re heading out for a fun filled day of crappie fishing with Wade Middleton, Jim Behnken, and our fishing guide Chase Hux! Wade and Jim go as far back as 25 five years of friendship, and Jim has watched Chase grow up from an outdoors loving kid, to an avid outdoorsman as an adult, so today is sure to be a fantastic day on the water with this trio!

Nothing sets up a long day of fishing better than stopping off at a local bait shop to stock up on snacks, get an insider scoop on what’s biting, and of course, to fill their coolers up with live minnows for bait. Today we’ll see the Engel Live Bait Drybox and Cooler in action as it works to keep up with the guys, and ensure the minnows stay fresh and lively with air temperatures in the triple digits, and water temps in the low to mid eighties. Chase will act as our guide today, and take us around Choke Canyon to the areas he knows through guiding with the company that he co-founded, are guaranteed to give us the most bites possible. Choke Canyon Charters offers options to choose between day trips out on the lake, or take extended stays at their beautiful lake side lodging sites. Choke Canyon Charters is one of the best places on this legendary Texas lake to take a guided fishing trip, so head on over to chokecanyoncharters.com to book your fishing trip today!

While we’re out on the water, we’ll get some insider hints to the best ways to crappie fish, get an in-depth look at how using Gamin Livescope™ can give you an advantage on the water, and sit back and enjoy some good ol’ fashioned razzing between good friends! 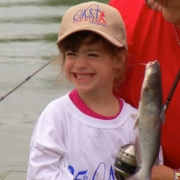 One of our favorite ways to introduce kids to the outdoors is by participating in the annual Haley’s Heroes C.A.S.T. For Kids Fishing event and Banquet! The mission of the C.A.S.T. For Kids foundation is to, “enrich the lives of children with special needs, support their families, and strengthen communities through the sport of fishing.” When kids join a C.A.S.T. For Kids day of fishing, they have the opportunity to get a break from their daily challenges and hear positive messages that they can accomplish anything they want despite their disabilities. C.A.S.T. For Kids is an incredible organization that has enriched the lives of special needs kids and their families for the last thirty years by hosting events such as these, and without support from volunteers and people dedicated to having an impact on these kids’ lives, these events couldn’t happen. If you’d like to find out more about how to become a volunteer, or set up a C.A.S.T. for Kids event in your area, visit castforkids.org. 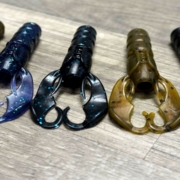 We’re getting treated to a visit from the Secret Lures man himself, Danny Blandford! He’s filling us in on some of the exciting new features of this bait that make it so enticing for fish. According to Danny, this bait is, “3.7 inches of crawdad goodness that you’re going to want in your tackle box this year!” The Stupid Craw™ is labeled with two molded dots on its belly which act as a rigging guide and give your jig head perfect alignment when rigged. You’ll know you’ve aligned your bait correctly when the hook lies perfectly within the hook trough on the top of the bait that guarantees a weedless presentation. The Stupid Craw™ also boasts pinchers unlike anything fish have seen and create a natural flutter on the fall that trigger predatory reactions from fish! Lastly, the Stupid Craw also comes available in five vibrant colors that no fish can resist! 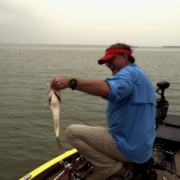 We’re on Choke Canyon Reservoir where Wade Middleton is throwing the Secret Lures Stupid Craw for the very first time, and he’s fishing it rigged the traditional Stupid Style on clear waters during the post spawn season. Wade has also chosen to cast on a spinning rod paired with 20 pound braided line and a 14 pound Sunline Sniper leader. Right off the bat Wade reels in his first fish, and describes how the fish see the bait and think, “I’m going to bite that stupid thing and eat it!” It’s not long before the fish have chowed down on his bait enough to remove the pinchers from its body completely, and we’ll get a first hand look at how quick and easy it is to rig another one and get his line back in the water. Yet again, almost immediately after he casts the new bait, Wade reels in two big fish one after the other! By the end of this episode, we’ll witness how Secret Lures’ latest addition to their soft plastics lineup is incredibly durable, versatile, and reliable under a wide range of conditions. If you want to get in on the secret to success and start catchin’ ‘em like a pro, head on over to secretlures.com to browse the entire lineup of Stupid Craws™!

It’s spring time and Jeff is in an area that has shallow, murky waters and seriously heavy cover where he knows the fish are hunkering down on beds during the spawn. While the Stupid Craw™ has been designed specifically for Stupid Style rigging, Jeff is testing out this baits versatility and has switched over to a Texas rig for the afternoon. He’s found that given the conditions and the heavy cover he’s fishing around, a Texas rig allows the bait to slid through the thick cattails just a little bit easier and get him the catches he’s looking to find. Another tip to keep in mind, is that when you find yourself fishing in thick cover such as Jeff, you’ll want to have braided line, a stiff heavy rod, and a heavy wire hook which will allow you to cut through cover. By the end of the day, this non-traditional way of throwing the Stupid Craw™ pays off as we watch Jeff catch fish after fish! 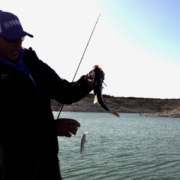 We’re continuing our coverage of the third annual Yamaha Turkey Bass Smash!  In our previous episode we saw more twists and turns than we ever have in this fierce competition! From watching Team Wersig’s monumental fall from first to last place after going over the two bird limit, to witnessing Clark and Brandon claw their way onto the scoreboard at the very last minute, we’ve already been treated to an action packed adventure and today will be no exception on Amistad Reservoir!

Out on the water, our teams will be fishing for a five fish limit, and the heaviest bag of the day will receive seventy points towards their overall team total. The second biggest bag of the day will earn fifty points, followed up by forty points for third place. Ten point bonuses will be awarded to the biggest fish of the day and the heaviest combined two fish, and a five point bonus will go to the team who reels in the second largest fish of the day. In any competition where you can earn bonus points, our teams will also have to watch out for penalties. Any team who has more than five fish in the livewell, returns to the river bank late, fishes past last cast, and fishes outside the designated parameters of Amistad Reservoir will receive ten point penalties per rule break.

We’re kicking things off with Team Wendlandt out on the water, and it barely takes any time before they find themselves with their first fish in the livewell! As we jump between boats, we’ll see these teams duking it out for a chance to take home that big blue trophy. While the battle rages on, over in Team Wersig’s boat yet another disadvantage is discovered, and it takes a little ingenuity and resourcefulness to solve their problem. By the end of the day, Team Wendlandt is looking like the clear winner as they’re the only team to have reached a limit, followed up by Team Wersig with three fish, and Team Middleton with just two fish in their livewell. As the clock ticks down and we close out our time on the water, will Team Middleton pull off a bass fishing miracle like we saw the day before when Team Wendlandt put down their turkey with only minutes to spare? Tune in and find out who will be crowned the champions of the third annual Yamaha Turkey Bass Smash! 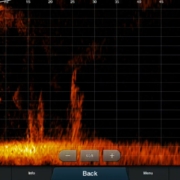 It’s all about Garmin electronics and why Garmin’s Livescope is an essential unit for any angler to have on their boat! When Garmin debuted Livescope, and gave anglers the ability to view a real-time image of what’s happening below their boat, it changed the game of fishing as we knew it. Today we’ll be on the water with several anglers who have incorporated livescope into their fishing arsenal of must-have gear, and we’ll see first hand how they use it to find those perfect fishing spots, and to find fish. From fishing Choke Canyon Reservoir with Wade Middleton as he capitalizes on the benefits of using Livescope, to watching fish react to bait in real time with Clark Wendlandt and Michael Wersig at Fayette County Reservoir, we’ll see just how incredible Garmin Livescope is for anglers. We’ll also get an opportunity to hear how this unit greatly helped Clark throughout his year to secure the title of Angler of the Year on the Bassmaster Elite Series!

Confidence is the key word we hear both pro and weekend anglers consistently using when talking about Livescope.  When you add a Garmin Livescope to your boat, not only are you increasing your chances of reeling in more fish, you’re maximizing your ability to see why you’re catching those fish! Visit garmin.com for more information on this and other Garmin products! 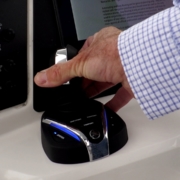 The new joystick control feature of the Yamaha Helm Master EX system removes the need for two hand control on your boat. This incredible feature offers a new, innovative, and more efficient approach to controlling your boat and really comes into play when you get into tight quarters and rely on boat response. Another cool feature of the joystick is that it gives you the ability to focus on one point of the boat, the bow. Unlike traditional systems which control the boat from the stern, this approach to controlling your boat drives from the bow of the boat, just like driving a car, and allows you to focus on what’s happening in front of you. For more information on the joystick control of the Helm Master EX, visit yamahaoutboards.com. 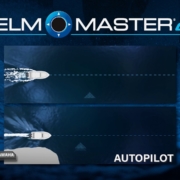