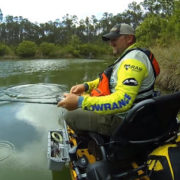 Learn from the Pros as Hobie’s Kevin Nakada teams up with Ron Champion for some Big bass and Big fun.

In one eight hour day of competition that you’ll see in this show the four anglers caught just over 60 bass weighing a total of approximately 153 pounds.

From Bethel University we’ll see the team of Cole Floyd and Carter McNeil who qualified for the Ranger Cup University Challenge by winning the BoatUS Collegiate Bass Fishing Championship presented by Bass Pro Shops. Winning, the most prestigious event in all of college fishing, against 400 of the best anglers, proves that these two are tough enough to stand up to any test.

From Adrian College we’ll see the team of Jack Hippe and Nick Czajka, who qualified for the Ranger Cup University Challenge by being the highest finishing Ranger Cup qualified team the FLW Collegiate Championship. They will represent the highly ranked Adrian College team who is without a doubt focused to perform well this week but in the years ahead on the college fishing scene.